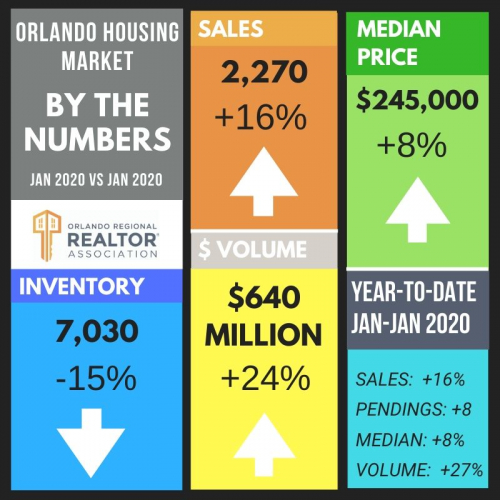 Orlando’s housing market in January marked a second consecutive month of double-digit year-over-year sales increases, reports the Orlando Regional REALTOR® Association. Sales improved by more than 16 percent compared to January 2019, while the median price experienced an 8 percent increase. However, the numbers of homes available for purchase in Orlando dropped by nearly 15 percent.

ORRA President Reese Stewart, RE/MAX Properties SW, points toward few interesting pieces of data in this month’s housing report. “First off, Osceola County’s 25 percent increase in sales was by far the greatest of the four counties that make up the Orlando Metropolitan Statistical Area,” says Stewart. “Secondly, sales of duplexes, townhomes, and villas surged 37 percent above the January 2019 tally, and likely reflects our ongoing shortage of single-family homes priced below $300,000.”

The first-time homebuyers affordability index increased to 99.81% from 96.52% last month.

The overall inventory of homes that were available for purchase in January (7,030) represents a decrease of 14.7% when compared to January 2019, and a 0.1% increase compared to last month. There were 16.0% fewer single-family homes; 11.9% less condos; and 7.0% less duplexes/townhomes/villas, year over year.

The average interest rate paid by Orlando homebuyers in January was 3.55%, down from 3.66% the month prior.

Pending sales in January are up 7.8% compared to January of last year and are up 25.9% compared to last month.

Sales of existing homes within the entire Orlando MSA (Lake, Orange, Osceola, and Seminole counties) in January were up by 11.8% when compared to January of 2019.

Each individual county’s sales comparisons are as follows:

This representation is based in whole or in part on data supplied by the Orlando Regional REALTOR® Association and the Stellar Multiple Listing Service. Neither the association nor StellarMLS guarantees or is in any way responsible for its accuracy. Data maintained by the association or by StellarMLS does not reflect all real estate activity in the market. Due to late closings, an adjustment is necessary to record those closings posted after our reporting date.

ORRA REALTOR® sales represent sales involving Orlando Regional REALTOR® Association members, who are primarily – but not exclusively - located in Orange and Seminole counties. Note that statistics released each month January be revised in the future as new data is received.

Orlando MSA numbers reflect sales of homes located in Orange, Seminole, Osceola, and Lake counties by members of any REALTOR® association, not just members of ORRA.

Go back | Show other stories